How to Clean a Shower Head

Your shower head is one of the most important parts of your cleanliness routine, so having one that’s clean and reliable is crucial.

To avoid getting buildup on your shower head that prevents it from working correctly, you should know how to clean a shower head to remove soap scum, mineral deposits, and anything else that gets in the way of its function.

Our helpful guide will teach you how to clean a shower head using both methods so that you can choose a cleaning technique that works for your schedule and needs.

When you’re in a time crunch and want the quickest cleaning method possible for your shower head, this quick-clean method should be right up your alley.

You’ll only need to set aside an hour or two for your shower head to look and work like new, and this method practically cleans it for you.

Use a plastic storage bag that’s large enough to fit over your shower head. Most small heads will fit into a quart size bag, while broader heads may need a gallon size bag.

Choose a durable bag, like one meant for storing freezer items.

Fill it halfway with white distilled vinegar, or enough that it will cover the holes in the shower head.

You can check that you have enough vinegar in the bag by placing it underneath the head and seeing where the head reaches into the bag.

Place the Bag on the Shower Head

Place the bag over the shower head so that the mouth of the head and the holes are submerged in the vinegar. Use a rubber band to attach the bag to the shower head around its neck, wrapping the band around as tightly as possible to prevent slipping.

Slowly move your hand away to ensure that the bag will stay in place.

If necessary, you can use plumbing tape to hold the bag on the shower head temporarily.

Allow the Shower Head to Soak

Leave the bag in place for at least one hour, but two to three hours is preferable. If you don’t need the shower for several hours, you can allow the head to soak for as long as possible until you need to use it.

As the head soaks, the vinegar will work its magic to remove soap buildup, mineral deposits, dirt, and other debris that inevitably wind up on your shower head.

Remove the Bag and Flush the Head

Carefully remove the bag by grasping it around the neck and pulling off the rubber band and tape.

Turn on warm water to the shower and allow it to run for about two minutes, which will flush the vinegar and the residue it broke up from the shower head’s holes.

Wipe down the shower head with a clean cloth soaked in warm water to remove any leftover vinegar and residue.

If you don’t clean your shower head often, you’ll find that it can get a lot of residue buildup between cleanings. When that happens, the quick-cleaning method may not be powerful enough to remove soap residue and mineral deposits that have built up over time.

This deep-cleaning method is one of the best ways to learn how to clean a shower head, especially if you have hard water that leaves mineral deposits behind frequently. 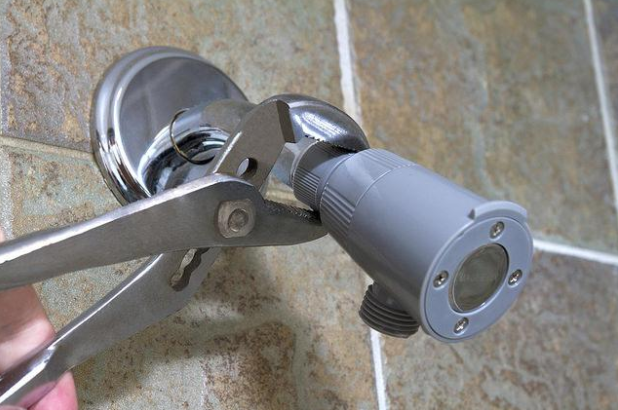 Photo by Your Best Digs licensed under CC BY 2.0

Most shower heads have a nut that attaches the head to the arm. Remove that nut using a wrench while you hold your shower head with the other hand to prevent it from falling.

Also, be sure to rinse the inside of this connecting piece.

Look at the holes while you do this to get an idea of how many might be wholly or partially blocked. You can tell this by seeing how water flows through the head.

If possible, remove the faceplate from the shower head and any other pieces that can detach. The more you can take apart safely, the more thoroughly you can clean them.

Use Toothpicks or a Toothbrush to Remove Debris

Use toothpicks to remove debris from the shower head holes. Gently poke them through each hole of the faceplate, turning them slightly to loosen debris and buildup.

Alternatively, you can use a clean, hard-bristled toothbrush soaked in vinegar to remove stuck-on debris. Gently scrub the faceplate with the brush using small, circular motions.

Using a clean cloth and a mild cleaner made for showers and their fixtures mixed with some warm water, wash all the parts of the shower head that you took apart.

Give attention to the faceplate, the head, and the piece that connects to the arm. You can also wipe down the arm attached to the shower, which also tends to get covered in mineral deposits.

Rinse the pieces with warm water and set them on a clean towel while you work on others.

Soak the Parts in Vinegar

Fill a bucket with white distilled vinegar and gently place each separate component in the bucket.

If you’re worried about your pieces clunking against each other, you can separate them into different buckets filled with vinegar.

Allow the pieces to soak in an undisturbed location overnight. Rinse them off in warm water in the morning, or before you’re ready to reassemble the shower head.

Put together the shower head the same way you took them apart.

It’s a good idea to replace the plumber’s tape located on the shower arm because the reused tape doesn’t usually prevent leaks as a fresh coating of tape.

Use a wrench to reattach the shower head to the arm. Be careful not to overtighten the nut, which can cause you to scratch its finish.

Let warm water flow through the shower head for a couple of minutes to rinse everything off from within and to test if the head is working correctly.

If you see that water is flowing freely through the holes and you don’t see any leaks, then you’ve successfully given your shower head a deep cleaning!

Now you know how to clean a shower head using both quick and deep-cleaning methods. Here are a few more tips that can help you maintain its cleanliness and keep it looking and working in its best condition for as long as possible.

Use Towels When Removing or Reattaching Your Shower Head

Depending on the finish of your shower head, you might end up with scratches when you detach or reattach the shower head to the arm using a wrench.

If you’re worried about this happening, you can wrap a thin towel around the connecting nut before you use the wrench. It will act as a barrier between the finish and the wrench to prevent dings, scratches, or gouges.

Vinegar is the best cleaner to use on shower heads made with just about any finish. Avoid using chemical cleaners if possible, especially those with bleach.

Chemicals can have harmful effects on different types of finishes, while vinegar is a natural cleaner free of chemicals and toxins.

Cleaning your shower head regularly – at least once a week – is the best prevention for mineral deposits and other forms of buildup.

If possible, get into the habit of wiping down your shower head with a clean towel after every shower. Pick one day a week to use the quick-cleaning method, and you can probably avoid using the deep-cleaning method altogether.

Conclusion: How to Clean a Shower Head

Most shower heads can look and act like new with the help of some warm water and vinegar.

You now know how to clean a shower head quickly and through deep-cleaning, so you can pick the method that makes the most sense for your type of water and shower head. Regular cleanings may be all you need to prevent buildup that won’t come off easily with the quick-cleaning method.